Presidential pardon for 89 prisoners, Ranjan Ramanayake not among them

Eighty-nine prisoners (89) who had been imprisoned for minor offences have been pardoned under the Presidential amnesty to mark the Prisoners’ Day on 12 September, the Prisons Department said.

Accordingly, a group of them were released yesterday (19) following PCR results. However, Ranjan Ramanyake was not in the list, as many expected.

Among the released prisoners are 10 inmates of Mahara Prison, 07 inmates of Bogambara Prison and 05 inmates of Welikada Prison.

According to the Prisons Department, PCR tests were carried out on them and those who had negative test results were released yesterday (19).

Other prisoners too will be released after getting their PCR results. 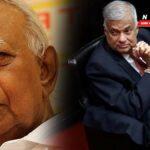